From the narrative being delivered by most news sites, it would appear that Australia’s housing boom may be coming to an end. This follows a rise of property price rise of over 22 per cent last year and the trend is continuing into 2022. Of course, it’s Melbourne, and Sydney that have had a significant decrease regarding property price growth. Then of course there is the issue of Inflation, which is increasing in part thanks to overseas pressures and the effects of the COVID-19 pandemic on supply and demand.

So is Australia’s housing boom actually ending and what exactly is causing house prices to fall in the above mentioned states? Well, there are a few variables here, however, the main reason is rising mortgage rates. Fixed mortgage rates have slowly risen (and continue to rise) in response to the Reserve Bank of Australia keeping variable mortgage rates low.

A large portion of Australian mortgages are made up of variable rate home loans and according to the RBA, they won’t lift the cash rate until some time in late 2023. Therefore, inflationary pressures wouldn’t force things to move faster and variable mortgage rates would remain on hold till that time. At this present time, underlying inflation is expected to reach 3.25 percent this year. Now that we have rolled over to the second month of 2022, the cash rate is still holding at the record low 0.1 per cent, a rate that it’s maintained since 2010. However, various sources suggest that the higher than expected inflation will force the RBA’s hand, leading to them to raise the cash rate earlier (potentially as soon as the third quarter of 2022). In the event that this happens, this will lead to further downward pressure placed on property prices.

During the course of the COVID-19 pandemic, mortgage rates dropped exponentially, which in turn led to a housing boom. It makes sense then, that as interest rates rise, the opposite will occur. Speaking of the pandemic, the events of the last two years have had an effect on wage growth, partly due to unemployment or limited employment during the crisis. The RBA is waiting on wage growth to exceed 3 percent before letting inflation force their hand.

Now, I mentioned earlier that Sydney and Melbourne have had a significant drop in terms of property price growth. However, for Queensland and South Australia, it’s an entirely different story.

Of course, Queensland’s current growth is corrective as it missed its last two property growth investment cycles. Currently, South East Queensland is seeing property prices reaching record highs, experiencing a 2.9 per cent increase in December alone. If we look south of Brisbane, toward the Logan and Beaudesert regions, we’ve seen a 4.2 percent increase over the last year and 3.4 percent to the west in Ipswich. But wait, that’s not all! The Gold Coast has seen a whopping 31.9 per cent increase in property prices since this time last year.

The percentages in the below chart show Gold Coast property growth in January 2022 alone:

Prices in Queensland are only expected to continue rising in the lead up to the 2032 Brisbane Olympics.

South Australia paints a similar picture to Queensland with more than three-quarters of Adelaide properties expected to record an annual price growth of 10 percent or more. The majority of suburbs leading the property price growth are those circling the Adelaide CBD.

You can see from below where growth occurred the most between May – November 2021 in Adelaide: 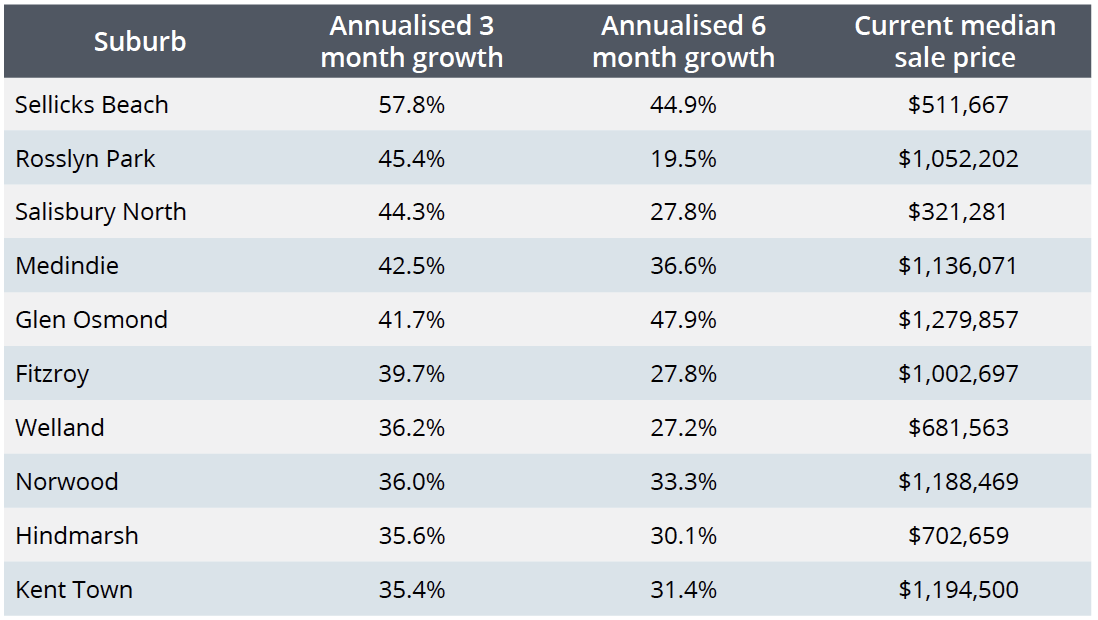 Now, it’s not just in property, but in many aspects that South Australia is indeed booming. In fact, Screen Australia has put more money into South Australia than any other state. Did you know that the latest Mortal Kombat film was shot in Adelaide? The Hollywood blockbuster was filmed all over the city, providing countless jobs for the industry. Now that a sequel has recently been announced, it’s very likely crews will return there for filming.

It doesn’t stop there either. In late 2021, SA secured a major defence contract announcing in September that the Osborne Naval Shipyard in Adelaide had been chosen as the location for the construction of eight nuclear-powered submarines. The state government believes the deal has cemented SA as the shipbuilding capital of Australia and will provide a massive job boost. South Australia is also home to the South Australian Space Industry Centre and the recently built Oculus Observatory (the first in the world to use a passive radar system, enabling tracking of objects in low orbit). It’s evident that the state government is the major factor in South Australia’s growth by pushing projects in the state.

We’ll leave it there before this turns into an essay where the readership drops off. Ultimately, yes, in a way the news isn’t lying when it reports that Australia’s housing boom is potentially coming to end. However, they’re choosing to not mention the broader picture which includes the states where growth has and continues to occur. This is why it’s critical to check the validity of news articles you read. A news report about the crash of the housing market isn’t going to tell you that countless homeowners are flocking to places like Queensland, purchasing homes sight unseen. Why? Because it doesn’t fit the narrative they want to tell.

We bring global opportunities to astute wholesale, sophisticated, and retail investors. We are here to support you regardless of where you are in your investment journey.

The information on www.foxiinvest.com is general in nature and does not take into account your personal circumstances, financial needs or objectives. Before acting on any information, you should consider the appropriateness of the relevant product, having regard to your objectives, financial situation and needs. In particular, you should seek independent financial advice and read the relevant Product Disclosure Statement for full disclosure of risks and the Fund TMD before you invest.

Any past performance information is provided for illustrative purposes only and should not be relied upon as (and is not) an indication of future performance. None of FOXI Invest, its related bodies or associates nor any other person guarantees the repayment of capital or the performance of the Funds or any particular returns from the Funds.